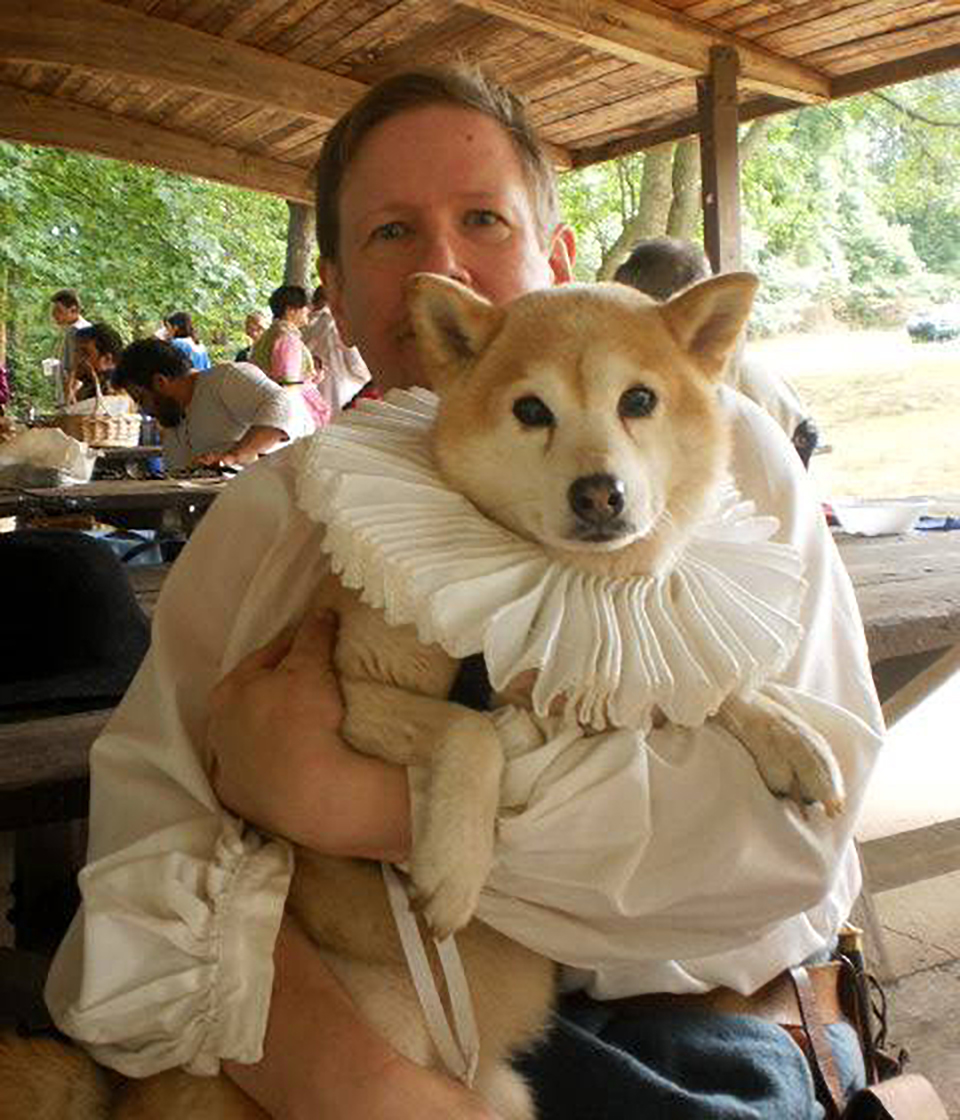 I was married on my 33rd birthday, October 13, 1990.  My wife, Denise, introduced me to the concept of playing with history. She’d been in the Society for Creative Anachronism for several years by the time she met me. And gradually, after fighting off a bit of self-consciousness, I too felt the bite of the history bug.

It’s hard to do justice trying to describe the SCA with too short a definition. Picture living history done as a Renaissance faire — or more like a timeline event: the coverage period is more than a millennium. A Roman centurion is too early; a colonial Virginian is too late.

It’s also, of necessity, the best an American (at first, a Berkeley student in 1965) can do with a limited budget, considering the European history they’re living in is on the other side of the world. Events with big turnouts have to make do with elementary school cafeterias and VFW halls. It’s a lot for the imagination to handle.

While a re-enactment group’s main activity is to demonstrate history to the public, events in the SCA are staged primarily for themselves, for the fun and education of each other, and for deepening and widening a circle of friends. (It’s first and foremost a Society.) There are demos, but too few for my preference.

Once you join you have an unrestricted amount of time getting to know the nationalities and time periods of the practitioners who take history seriously — very optional in the Society. Once you pick one, you find a mentor, either one with whom you share an interest in time period and nation, or one who can teach you how to research it on your own. Either one is a hard slog when the rules are lax and the smorgasbord of time is so vast. The tendency is for events to devolve into modern costume parties. After a while I felt like a Shriner, talking about the modern day with old friends. A pleasant pastime, but not historic enough for me.

So history went by the wayside, as we moved to suburban Philadelphia, the backyard of Revolutionary War re-enactment HQ.

With visits to two area battle re-enactments each experiencing its anniversary divisible by five — Brandywine, then we saw just how seriously folks still take the Revolutionary War! I stood at the intersection of two walkways, and turning 360 degrees, and see literally no sign of the 21st century. And what I did see was all of the same time period. An officer came by, and spent some time bending my ear; I could tell he was thrilled with the task of telling me what he knows, so I let him go on; I’ve been in the same situation, and I know how pleasurable it can be to recite what you’ve learned. The living historian that emerged from my break of a few years, here in the Philadelphia area, is one eager to do a competent job at authenticity, and whose ears perk up when I hear the word “juried” — at this activity that, charmingly, calls itself “The Hobby.”

I’m not sure why I waited as long as I did.

Welcome to WordPress. This is your first post. Edit or delete it, then start writing!